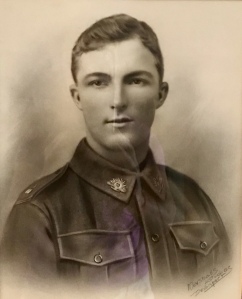 Gordon Iles was born on March 13th 1895, the first son of Arthur and Margaret Iles, farmers at Thirlstane east of Devonport in North West Tasmania.

He enlisted in 1915 and left for Europe in October that year with the 15th Infantry Battalion. He would later be promoted to Bombardier and join the 10th Field Artillery Brigade.

He was killed at the Battle of Dernancourt in Northern France on April 5th 1918, aged 23, defending the allied lines from German attack. He is buried in Warloy-Baillon war cemetery.

What we know of Gordon Iles as a person comes from his correspondence with his family during the war, as well as letters written by his friends after his death.

His friends describe him as “cheery” and “game”. His own words reveal a strong bond with his tight-knit family, his community and the land they worked.

As I post more of the letters I will add information here about Gordon Iles’ family life, war record and personality.