I was recently contacted by Noelle McArthur who lives in Melbourne with her husband Tony. Noelle and Tony have silk embroidered cards Gordon Iles sent from the western front to his family in Tasmania. Their daughter, Anita, scanned the cards for me. I’m posting the scanned cards to mark Mothers Day because two of the cards are to Gordon’s mother, Margaret.

Below the scans, I have included some information about silk embroidered cards and some thoughts about the cards Gordon sent. These include observations Tony and Noelle have made about one particularly moving and mysterious card. But first, here’s how Noelle and Tony came to have the cards and how I came to know of it.

Sarah Iles was Gordon’s older sister. You might recall the letter transcribed in my first post in which Gordon’s youngest sister Florrie wrote to him about Sarah’s upcoming marriage to Alec Dawson. Alec and Sarah’s daughter Joan married Bill McArthur. Their son, Tony, moved to Melbourne and married Noelle. Sarah was close to Gordon and we assume she inherited the embroidered letters when their mother, Margaret, died. Joan inherited them when Sarah died and Tony when Joan died.

That was 26 years ago. Four weeks ago Tony’s cousin, Josie Dawson, who is another relative of Gordon’s, shared my new website with Noelle. Josie has a long-time interest in Gordon Iles that I’ll share with you in a future post. Noelle wasted no time getting in contact. We have since talked several times about the cards and about family history in general. Noelle has discovered a surprising link between all the people mentioned above that goes back generations before World War One. That will also be revealed in a future post. Meanwhile, I feel like I’ve made a new friend as well as finding new cousins.

One of my objectives in starting this site is to bring to light correspondence I am not aware of, revealing more about Gordon, his family and the impact of the war on them all. I couldn’t be happier that process has started already. A big thank you to Noelle, Tony and Anita for their generosity and help. Here’s a photo of Noelle with one of Gordon’s cards. After that are scans of Gordon’s cards followed by some notes about them.

Christmas and New Year’s card from Gordon to his mother, Margaret, and the rest of his family (front, centre then back) 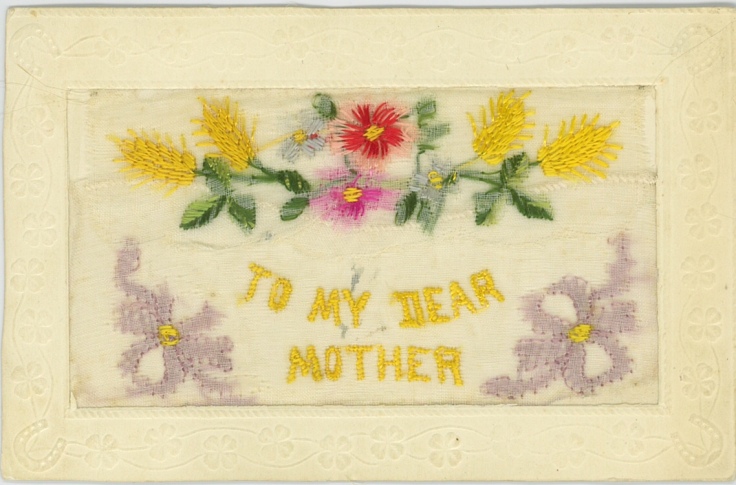 Card from Gordon Iles to his mother (front then back) 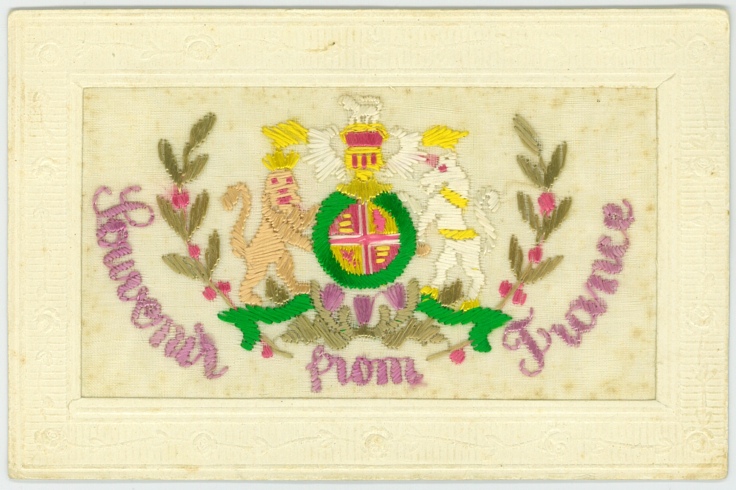 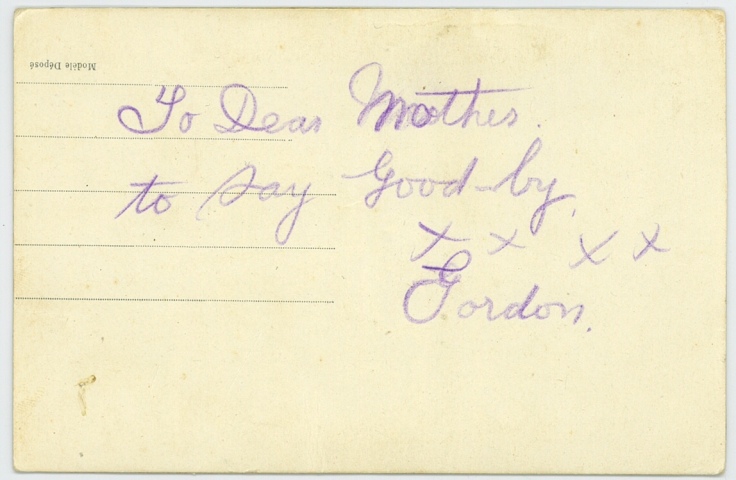 Souvenir cards embroidered in silk first emerged at the end of the nineteenth century. But they reached peak popularity during World War One. French and Belgian women who had fled the war zone embroidered pre-set messages and scenes at home, then sold their handiwork to factories that specialised in setting their embroidery in cards. As you can see, the cards were well made. The stitching is still intact and the colours still vibrant.

Up to 10 million cards, featuring thousands of different designs, were manufactured and posted home from the western front. Cards posted to Australia were sent in the military mail which is why they weren’t stamped, franked or dated. One explanation for the popularity of these cards is that they were an easy way for soldiers to express their feelings without touching on the horrors of war. But that doesn’t explain why some cards featured war scenes including cities in flames.

The cards Gordon sent home would be relatively unremarkable but for two interesting features.

This is an unusual design. It isn’t found in the Australian War Memorial’s collection of over 1400 embroidered cards from World War One. There are other airplane designs but not this one. Also notable about this design is the rarity of monoplanes in World War One. Biplanes and triplanes were considered more manoeuvrable and reliable. If the monoplane in this card is based on a real plane it is probably the Bristol M.1 Monoplane Scout, the only British monoplane manufactured in World War One. Only 130 were built, compared to tens of thousands of biplanes.

It is interesting to me how Gordon’s cards juxtapose an airplane with more traditional heraldic and floral motifs. This is a reminder that Edwardian gentility and sentimentality were about to be swept away by all those high-powered machines whose promise of unprecedented speed, convenience, freedom and destruction shaped the twentieth century.

On one of his cards, sent from France, Gordon wrote simply,

Why was he saying goodbye? Tony McArthur has observed the handwriting on this card is less neat than the handwriting on the other cards, suggesting it was rushed. Tony and Noelle have often wondered if Gordon sent this card fearing it would be his last. It’s an interesting possibility and the best hypothesis we have. But it is impossible for us to be certain. As I noted above, we don’t even have a date to guide us. The sure meaning of the card died with Gordon’s immediate family, or possibly with Gordon himself. All we have left is a precious scrap of paper, made all the more valuable because it impels us to keep asking questions despite history’s reluctance to answer.